/ About Us / Company’s Profile

Inaugurated on 5th December 1999, the BTS SkyTrain was the first electric mass transit railway system to commence operations in Thailand. Built and operated by the Bangkok Mass Transit System Public Company Limited (BTSC), the project was entirely funded by private enterprise. The BTS SkyTrain operates on two lines: The Sukhumvit Line, royally bestowed with the title 'Elevated Train in Commemoration of His Majesty the King's 6th Cycle Birthday, Route 1 (Sukhumvit Line), running 17 kilometers and on 12th August 2011, a 5.25 kilometer extension of the Sukhumvit Line commenced operations, expand in train services from On Nut to Bearing Station.

The BTS SkyTrain system is a standard mass transit system commonly used in cosmopolitan cities. The SkyTrain runs on an elevated track, using a third-rail system to supply electricity, with in-bound and out-bound trains running on separate tracks and platforms. The BTS SkyTrain changes the face of the urban commute and raises the standard of mass transit services with each train serving up to 1,000 passengers per journey compared to the 250 vehicles on the roads transporting the same number of commuters.

In addition to serving businesses, shopping districts and residential areas in the heart of Bangkok, an extension project is also in the plan in order to reach the broader community of potential passengers in suburban Bangkok. 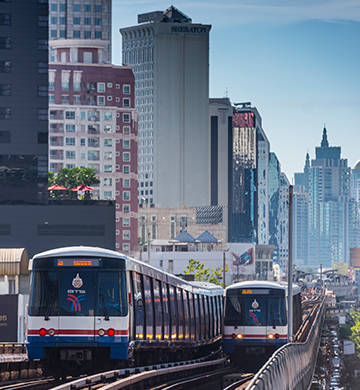